A, The or Nothing? How to Master English Articles in 2 Simple Steps

‘A’, ‘the’ and ‘an’ – these are called articles and they are the smallest words in English. But they cause some of the biggest problems.

By the end of this guide you will understand how and when to use articles – but why are these small words so important?

Let me tell you the story of Ugo, a young Italian lawyer.

One day he receives a phone call from Nancy, who needs some legal advice. She asks to schedule an appointment, and this is part of their conversation:

– Ugo, I’ve looked at my schedule and I was wondering if I could come to your office on Thursday.
– Thursday… I’m sorry, Nancy, but that’s not possible unfortunately. I’m going to prison.
– You’re going to prison? Really?
– Yes, I’m sorry. I have to.
– Oh…uh…well, in that case, goodbye.

Ugo lost a potential client – what did he do wrong? He misused articles!

He confused ‘go to prison’ and ‘go to the prison’ – one little word can make a huge difference. As you can see, omitting an article can be a costly mistake.

If like Ugo you also feel confused about English articles, read on.

All you need to remember are 2 simple questions – let me explain.

To choose the right article in English just ask yourself:

All right, let’s see what those questions mean.

Question 1: Is the noun countable?

Countable means that the noun can be counted. For example ‘book’ is countable and we say ‘one book’ or ‘two, three, or several books’.

Uncountable nouns cannot be counted and represent something that is not divisible, such as a quantity, or a material, or an abstract concept. For example ‘bread’, ‘air’, ‘water’, and ‘love’ are uncountable because they cannot be reduced to a unit.

The third category causes many difficulties for English learners: some nouns can be either countable or uncountable depending on their meaning. 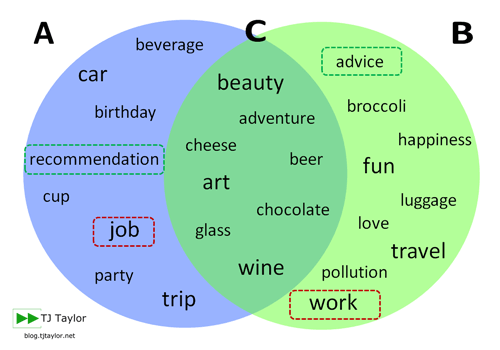 Why are those categories difficult for English learners? Because they don’t always match your native language.

For example, in Italian ‘lavoro‘ can be translated as ‘work’ or ‘job’, but only ‘job’ is countable.

So if you refer to a specific working position (un lavoro), you should say ‘a job’. But if you mean professional activity in general (‘il lavoro‘), you should use the word ‘work’ with no article in front of it.

Another example is ‘un consiglio‘: ‘advice’ is the correct translation but it is uncountable, so if you want to refer to a specific ‘consiglio’, you should say ‘a recommendation’ or ‘a suggestion’.

How do you know if a noun is countable or not? Unfortunately nothing in the form of the noun will tell you that.

So, when learning new vocabulary, you need to learn the word and ALSO if it is countable or not.

To help you remember, you can choose to use a specific color to highlight uncountable nouns in vocabulary lists, or you can memorise them with an example sentence that shows how they are used – for example, ‘John gives good advice’ will help you remember that ‘advice’ is uncountable.

Also, you can always check whether a word is countable or uncountable in a good dictionary, such as the Longman Dictionary of Contemporary English.

So, after asking ourselves the first question, let’s now turn to the second question:

Question 2: Is the noun definite?

What does ‘definite’ mean? A noun is definite if it refers to an object that is known by the person who is speaking and by those who are listening.

In other words, the object that is being referred to is obvious to everyone.

There are 5 situations that make nouns definite. 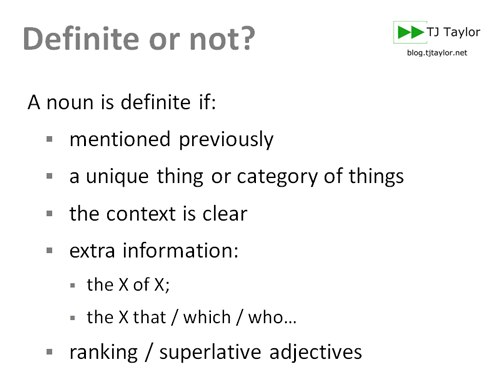 Putting it all together

All right, now that you have answered these two simple questions (countable or uncountable? definite or indefinite?), you can choose the right article by looking at the following diagram: 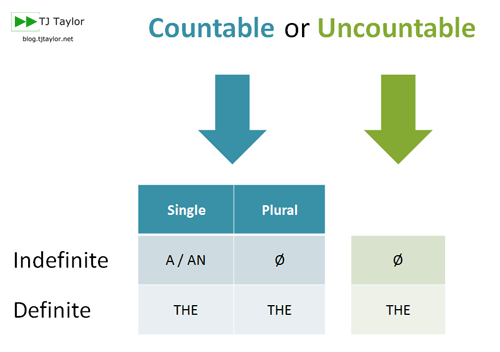 You notice immediately that articles vary according to the type of noun (question 1), to the context (question 2), and to quantity (singular or plural).

The symbol Ø means ‘zero article’ – in other words, there is nothing before the noun.

Also, some forms are identical (‘the’), so you don’t have to memorize many article forms. And that’s good news!

So let’s apply what you have learnt to some examples:

Naturally some uses of English articles are idiomatic: the questions above don’t apply to them. There are 2 types of nouns that require your special attention.

Now that you have learnt the 2 simple questions and you know which article to use – what’s missing? Practice!

Has this explanation been helpful? Please let me know in the comments below: