There will be times when it’s difficult to get motivated because you’re frustrated with the language.

There may be grammar concepts you don’t quite understand, or you just can’t seem to remember all those words on that vocabulary list. You might wonder if all those years you put into studying are worth it.

In fact, many people have felt the same as you. You are not alone. 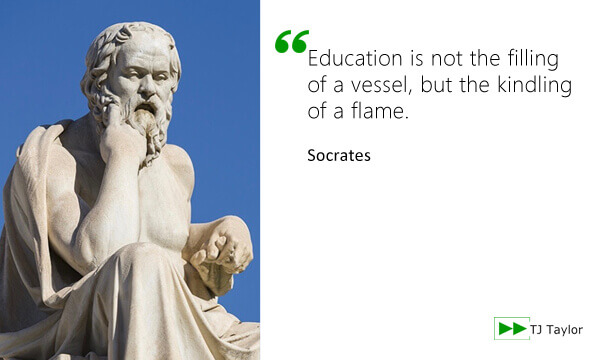 
Just when they feel like giving up, they found that with encouragement from others and some hard work, they were able to achieve their goals.

And you can too.

I’d like to share with you the stories of some students I have personally taught that have gone through exactly the same situation, and had the same problems as you.

They are proof that, no matter what your level is, you can do it.

The secret is to keep motivating yourself and to persevere when you feel like giving up.


There were two students who had similar English levels when they started my class. Bob was a very shy person that worked in the IT industry and would barely speak, while Ricardo, a project manager, was a very outgoing student who loved to participate.

But when it came to talking to other students casually in English before or after class, they felt lost.

While both of them knew a lot of vocabulary, they didn’t know how to use these words in normal, everyday conversations – for example, they would constantly confuse the words ‘fun’ and ‘funny’.

After a few weeks, Ricardo started to get really embarrassed and would arrive at class just when it started, and would leave as soon as class time was over.

During class, however, he would talk a lot. When it came to group work he would talk less. Bob was the same – he barely spoke on his own.

One day I noticed that Ricardo went up to Bob to ask about his day. I listened in for a few minutes because I was curious to see how Bob would respond. Bob responded that he had a long and tiring day at work. They both talked briefly for 5 minutes.

I started noticing that over the next 6 months or so, Bob and Ricardo would sit together and chat before and after class. They first started by staying a little bit later, around 15 minutes. Then they also started arriving a little bit earlier, around half an hour. 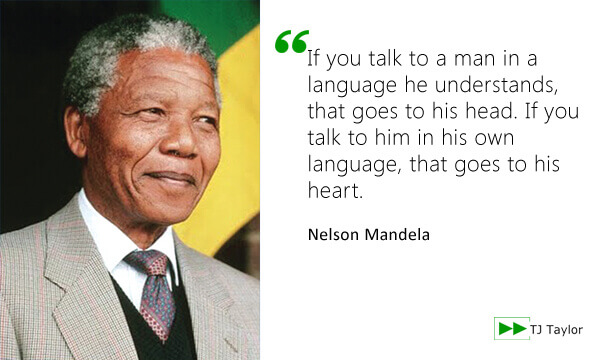 
One day I was getting my teaching materials ready and noticed laughter in the classroom. It was Ricardo and Bob swapping funny stories.

Bob became more outgoing in class and started participating more. Ricardo spoke a lot as usual, but I noticed that his language became more natural, closer to that of a native English speaker.

To this day, Bob and Ricardo are still the best of friends. They go on trips together with their families, and still help each other out with learning English.

Lesson learned: having someone to learn English with can serve as a great motivator. 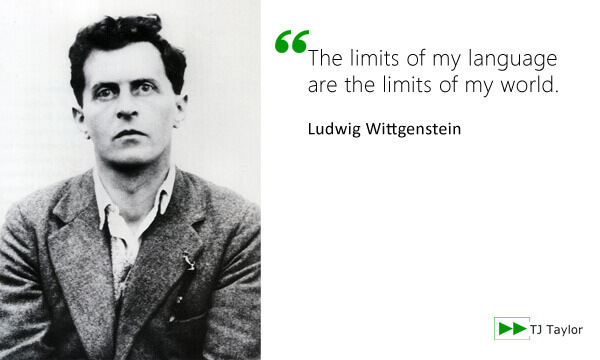 
A Chinese student I taught was very motivated. He told me that his dream was to go to the USA, and together we made a plan to improve his skills.

He would read a novel or two every month and he would proceed to tell me what happened in each of them. Once a day he worked on writing essays or short stories, and asked me to edit them during our telephone lessons.

One day, as we were chatting right before class, I briefly mentioned that the USA has an employment-based visa. This type of immigration visa allows someone who is highly skilled to move to the US, even if they don’t have a job offer yet.

He was very excited about this idea and wanted to know more. We found a website where he could apply to find out more, and was told that he had to prove his English was fluent enough. 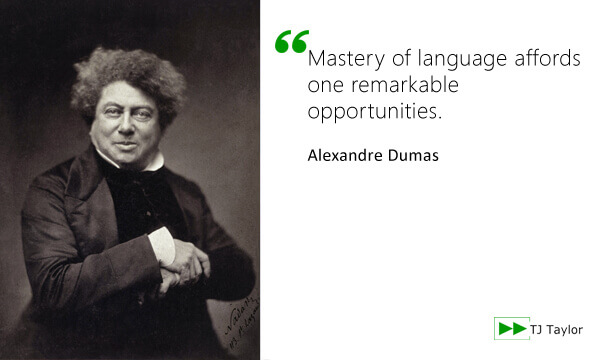 
He was scared he would get rejected, and I reminded him that he had worked too hard to give up.

Within the next few days he went and signed up for a TOEFL test. He scored well and went through the US visa application process and was accepted.

That was a few years ago – the last I heard of him, he was interviewing for a job in Texas.

Lesson learned: if you let fear get in the way of what you want, you will never achieve your goals with learning English.

From Broken English to English Editor 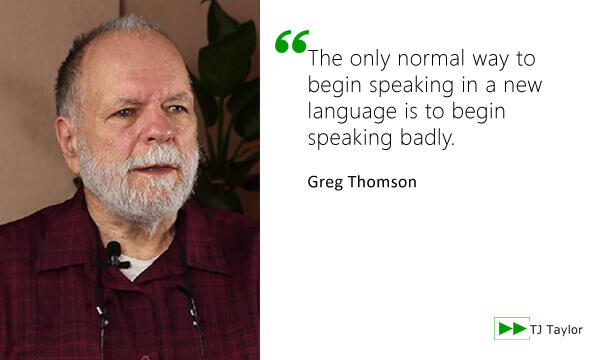 
Five years ago, I was working in a training center that taught professionals who wanted to work with foreign companies. Many students spent a few months at the center so they got to know each other well.

One day a new student who barely spoke English walked into my class. He was in an entry position at his company, and during his first week in class he showed me a picture of his wife and children.

However, he was very shy and looked extremely nervous every time he was in the classroom.

Most of the time I only heard him say “hello” and “goodbye” during class. Many of the students didn’t know how to work with him because they were not able to communicate with him in English.

Many students simply ignored him.

He would come in with his book and try his best to read the words presented in front of him. Most of the time he failed, and some students were kind enough to correct him.

Even though he appreciated the kindness, he still felt sad. I knew that he was comparing himself to everyone else around him.

A week into class, this student would come to me after every lesson and ask me to help him read. In his broken English, he said “Help…me…good…English.” 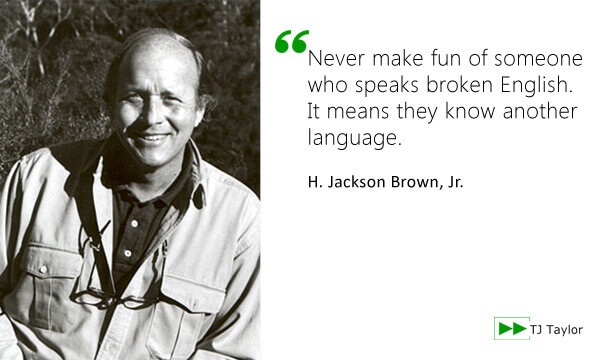 
He started drawing pictures or adding notes in his native language. During class discussions he would try to use words he learned the day before.

He started out using the words incorrectly, but within a few months, he had learned enough words to have fairly good conversations with students in the class.

The students who previously ignored him started becoming friendlier towards him. He also learned a few jokes and shared them with his classmates.

Five years later, I still keep in contact with him. He tells me that he helps to edit business correspondence for his colleagues and gets asked to go on business trips overseas. He’s hoping to continue to improve so that one day he can get promoted.

Lesson learned: don’t be afraid to make mistakes. The more you make, the more you learn from them. 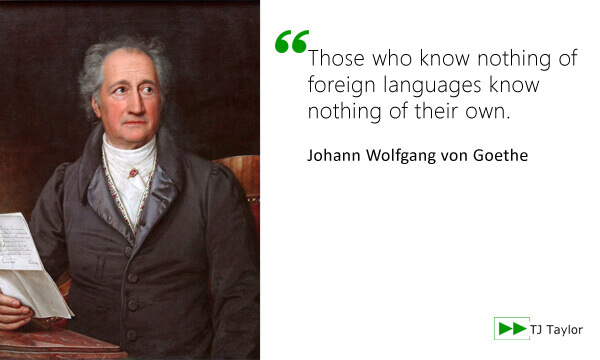 
An Italian student of mine was really struggling with learning more advanced grammar in class.

She was taking courses in English writing because she had recently gotten a promotion at work. Part of her responsibility was to write client presentations, business correspondence and proofread other people’s work.

She put a lot of pressure on herself to do well and would stress out constantly in class.

During one class, students were paired off and told to edit each other’s work. Her partner was being friendly and giving constructive feedback, but she got visibly upset. She excused herself and didn’t return until class was over.

I asked her what was wrong.

She was very hesitant at first to tell me what she was struggling with, but then told me that she didn’t understand how to construct certain complex sentences.

I tried going over rules such as verb tenses and subordinate clauses, but she kept getting more confused.

Instead of shying away, she would ask me again and again how to write something if she didn’t understand.

During this time I was learning Italian. I remembered from a lesson that some Italian grammar rules were very different from how English grammar works.

I decided to bring my Italian language textbook to class the next day and do a lesson comparing Italian and English grammar. 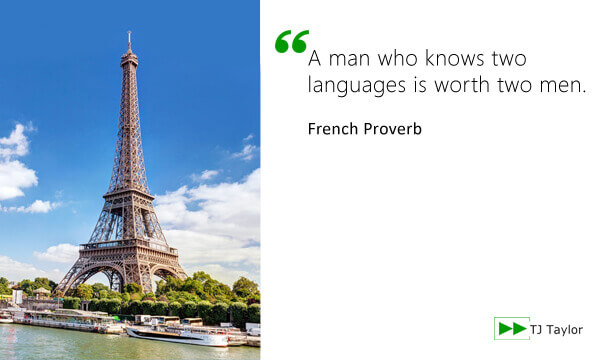 
As we talked about some of the similarities and differences, I saw that she started to smile. When her partner was editing some of her writing, she wasn’t nervous at all.

She told me later that because she was able to compare English with her native tongue, she could grasp English grammar more easily.

Lesson learned: never learn English in isolation. If you can compare English to what you already know about your own language, it will be much easier to improve.


Think about how you started learning English, and how you have progressed. I’m sure you have a story that is worth sharing.