Most schools will have a translation of your contract available if you ask, but your payslip will almost certainly be in Italian.

We’ve listed below the most common and useful Italian words to know, as well as an example of an Italian payslip to help you track where your money goes. 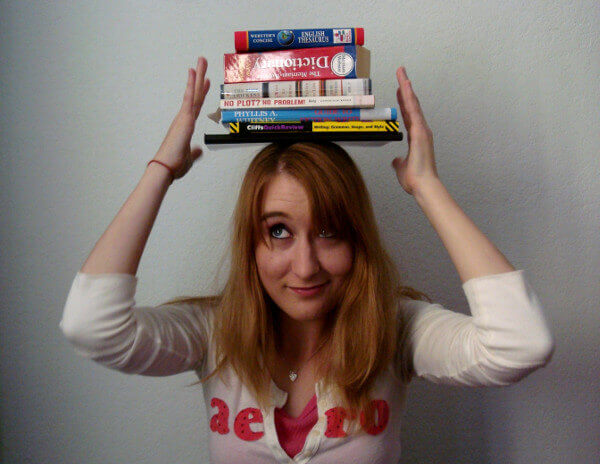 The numbers in brackets refer to the items on the example payslip at the bottom of this page.

Codice fiscale
– tax number, similar to the British National Insurance number or American Social Security Number. It is your universal reference number when dealing with the state and is very simple to obtain, just by submitting the application form at your nearest tax office or even online. It is important to note that it does not actually entitle you to anything nor is it a form of authorisation, but simply your universal reference number. It is needed to buy a mobile phone, open a bank account, etc.

Collaboratore
– the name of a type of ’employee’ who collaborates with but is not subordinate to the employer, working under any of the last three options in the employment FAQ.

Collaborazione occasionale
– literally, occasional collaboration, a type of employment with various limits in terms of annual compensation and frequency of payment, details are covered in the FAQ on employment contracts in part (iii). Some schools incorrectly refer to this as a ‘co.co.co.‘ contract, which is actually a version of another type of contract, described 2 definitions below.

Competenze
– this word has 3 main uses, and so the most appropriate translation depends on the context. It is used in contracts to mean ‘jurisdiction’ or ‘responsibility’ of a person or institution, but when it comes to money and accounting it translates as ‘accrual’ – in other words, which month, year, etc. your money is earned or due, also when it comes to paying taxes. The third and most common meaning in general use is ‘skills’.

Contratto a progetto
– also called a ‘co.co.pro.‘ or referred to by the name of a previous version, the ‘co.co.co.‘. A type of employment contract which was used for independent but non-freelance teachers, and is now illegal; details are covered in the FAQ on employment contracts in part (ii).

Contratto a tempo indeterminato
– a permanent employment contract with no end date. This is normally considered the ‘gold standard’ contract by Italians but is not very common, at least for new employees and language schools; details are covered in the FAQ on employment contracts in part (i).

INAIL
(1) – an insurance fund for workplace health and safety, set up to deal with work-related injuries and disabilities. Contributions are mandatory.

INPS
(2) – the Italian pension fund. Sometimes referred to as ‘IVS‘ on payslips, the level of contribution and the share that is deducted from your gross pay varies according to the type of contract.
If you have a ‘contratto a tempo indeterminato‘ or a ‘contratto a tempo determinato‘ the employee pays one third of the contribution out of their gross salary, and the other two thirds is paid by the employer.
Freelancers working with a VAT number pay almost all of the contribution out of their own pocket. Some freelancers have the option of adding a 4% INPS supplement to the gross invoice total, which covers approximately one sixth of the total owed.
Those working with a ‘collaborazione occasionale‘ pay the entire contribution themselves.

IRPEF
(3) – your personal income tax, which is calculated for your first payslip, and your tax rate for the rest of the year is extrapolated from that estimate and applied to your future payslips. At the end of the year this estimate is checked and any difference is then added or deducted from your December payslip.
There is also an extra regional income tax to add, which varies from region to region, called ‘addizionale regionale‘ (4).

Lavoro autonomo
– the type of work carried out autonomously, without strict management control by the employer, referring to work carried out under a ‘collaborazione occasionale‘ contract or as a freelancer with a VAT number.

Partita Iva
– the Italian version of a VAT number. Registering for a VAT number means you can only be employed as a teacher under the fourth category of contract in the employment FAQ, and requires you to keep and submit accounts and VAT records, make income tax and VAT pre-payments, etc.

Permesso di soggiorno
– work visa, now only necessary for non-EU citizens, and must be applied for and obtained before being able to work legally in Italy.

Ritenuto d’acconto
– literally, a deduction from the gross compensation to make an advance payment on taxes due. Usually 20%, this is deducted from your invoices if working under a ‘collaborazione occasionale‘ or with a VAT number and is paid by the employer to the government on your behalf. Make sure you receive a payment certificate in February/March of the following year proving that the payments have actually been made on your behalf, otherwise you become liable to settle the full tax bill.

TFR or Trattamento di fine rapporto
– a type of severance package for employees with a permanent employment contract. It is earned each month but paid out, with some exceptions, at the end of the contract.

How to Understand your Italian Payslip

The numbers refer to the explanations above. 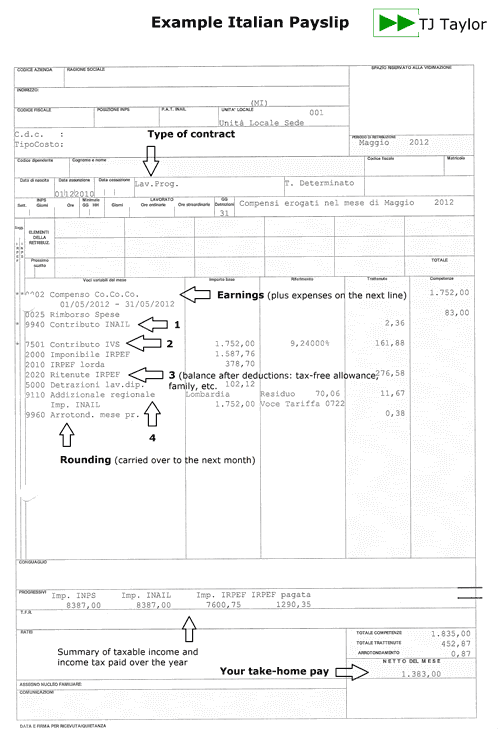 Open a large version in a new window